Everything Hinges on Your Thoughts: Sink or Swim 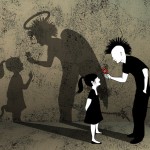 Once there was an old devil who though that people’s lives were too happy. He said, “We should go disturb them, otherwise people will think the devil doesn’t exist.”

He sent the first little devil to disrupt a farmer. Even though the farmer worked hard every day, and his harvest was meager, he still felt happy and contented.

The little devil thought about how he could make the farmer’s life bad. He decided to make his field very difficult to cultivate so that the farmer might become lazy and quit.

The farmer, using just a simple hoe, worked hard in his field all morning. Even though he only managed to cultivate a small part of his field, he took only a short break before continuing on without complaint. When the little devil saw his plan had failed he returned to report to the old devil.

Taking a break from his hard work, the farmer sat under a tree and reached for his water and lunch, but it was gone! “I didn’t know there was a poor man in needed of food and water more me!” he thought. “I hope it can help him!” The farmer wasn’t angry. He actually commiserated with the person who stole his food and water.

Failing once again, the second little devil went back to tell the old devil the disappointing news.

Old Devil wondered, “Is there no way to make this farmer bad?” Just then a third little devil spoke up.

He told the old devil, “I have a way we can surely drive this man bad.”

The little devil continued to make suggestion to the farmer regarding which kinds of crops to grow ever year. It took only three years for the farmer to become very wealthy.

The little devil also taught the farmer how to make rice wine. He then sold it to make even more money.

Finally the day came for the little devil to show his results to the old devil. The little devil said, “Look here! I want to show you how I have corrupted this farmer.”

The farmer had organized a lavish dinner and invited all the rich and influential people from the town. They drank the best wine, ate the most exquisite food and had many servants to wait on them.

A servant went to fetch a new bottle of wine out of the liquor cabinet but, on the way, he stumbled and broke it. The farmer got very angry and scolded him, “Why are you so careless!”

The servant replied to the farmer, “Alas! Master, we didn’t eat since yesterday. We are hungry and feeling weak.”

The farmer said to the servant, “If you don’t finish your work, how can you expect to eat!”

The farmer and his guests continued to feast and drink until they were either dead drunk or unconscious, and their clothes ruined.

Old devil saw the state of affairs and was very pleased. He said to the little devil, “Oh! You’re amazing! How did you do it?”

The little devil replied, “I just let him own more than he needs. It is the best way to grow greediness in humanity. ”

“When the heart changes, attitudes change;

When habits change, then life changes.”