After he left home to become a monk, Juzhi, not yet a Zen master, stayed at Jinhua monastery and practiced in solitude. One day, a nun named Shiji came to his place. Without taking off her broad-brimmed rain hat, she walked in a circle three times in front of him then asked him, “If you can speak, tell me why I’m doing this and I will take off my rain hat.” In Juzhi’s mind he thought, “ There must be some Zen revelation in her action, but what is it?” When he didn’t reply, Shiji told him “Since you can’t give me an answer, I will take my leave.” After she left Juzhe kept thinking, “What was she trying to convey? What does her rain hat represent? If I can’t even answer this nun what is the point of my practicing?” He felt ashamed.
After this he was more conscientious in his practice. One day Zen master Tianlong came to Jinhua monastery. This gave Juzhi an opportunity to recount the previous day’s happenings to him. As the only explanation Tianlong erected one finger. At this moment Juzhi got enlightened. Since then, whenever anyone asked Master Juzhi about Zen, he would raise one finger and say nothing. 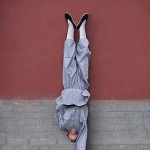 Juzhi had a servant boy who usually stayed at his side so he often observed Juzhi using his One Finger Zen to instruct others. Whenever Juzhi was not around, the servant boy used to answer questions in his place. One day Juzhi heard about this. He picked up a knife and went to talk with his boy. “I heard you also know Dharma, is that so?” he asked. The servant boy answered, “Yes, Master.” Consequently Master Juzhi asked him, “What is Buddha?” The little boy erected a single finger in answer. Swiftly Master Juzhi cut the poor boy’s finger off! It was very painful and the shocked boy turned around to run outside. Master Juzhi called him back. When the little boy turned his head to look at Master Juzhi he asked again, “What is Buddha?” The master and the servant boy each raised a finger. The boy saw his shortened finger and was instantly awakened.

I thought this story about One Finger Zen was only understood by Eastern people but after observing Western people showing a single finger to others I realized Western people also know One Finger Zen. However it usually is their middle finger. 🙂 This makes me curious… which finger did Master Juzhi show to others? I wonder if Master Juzhi, after reaching enlightenment, ever saw Nun Shiji again. Did he give her his special One Finger Zen?
What Master Juzhi did helped the little boy reach enlightenment. If this happened today I wonder if he would still reach enlightenment? Or would he say, “Damn! You cut off part of my finger! I am going to sue you. You are going to jail!” When the thought different from before, the result will be different from before too. 🙂

Zen usually cannot be explained or understood using words. But there is a big difference in meaning when a Zen master uses One Finger Zen or you and I do.