There are many different kind of Chi Kung in China and Taiwan. For many years in Taiwan, one style, called Si-Sue Jing (marrow washing sutra), continues to be associated with occultism. This is mostly because it’s a practice that uses men’s private parts. This practice goes by many names; Buddhists called it Si-Sue Jing; Taoists call it Si-Sue Gong; and independent instructors/schools give it different name like Jio-Jio Shun Gong. My students call it “Hoo-Hoo Qi Gong.” Its most common or informal name is Yin Diao Gong or “Pubic Hang Qi Gong”. 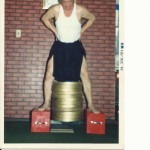 Si-Sue Jing was the first Qi Gong (Chi Kung) I ever learned. At that time Bruce Lee’s movies were very popular in Taiwan. He inspired me to begin martial arts. So, in high school, I chose a Tae Kwon Do after-school program. After finishing high school I was still interested in martial arts training, especially learning more about Kung Fu or Qi Gong. But, twenty-five years ago, Taiwan was still under Martial law, so society was heavily restricted. Presently Qi Gong is still not very popular because common Chinese martial arts fiction describes Qi Gong as being like a super power. This means that when people talk about Qi Gong practitioners or about learning Qi Gong most people don’t understand what it’s about. They believe that Qi Gong claims to give you supernatural powers after you learn it.

One day my father’s friend, who was a Chinese Medicine practitioner, told my father about a friend of his that teaches Qi Gong. He thought maybe I would like to go learn Qi Gong with him. My father asked me and I said I would like to try it, not knowing more than that. So, one morning I got up really early (six o’clock) so I could be at his house by about six-thirty. Once there I saw several people were already there before me. But even stranger, I saw they all were not wearing any pants or underwear and were hanging some very heavy stuff from a soft cloth tied around their private parts (Their scrotum to be exact)! …And then they proceeded to swing the weights back and forth along with some kind of breath exercise. At that time I was deeply shocked and wondered, “What the hell kind of Qi Gong is this? Why was it so different from what I had heard about Qi Gong training?”
My teacher told me this Qi Gong is called Si-Sue Jing and that it came from the Shaolin temple. I was to have no sex for the next three months of training if I was to have any chance of managing one hundred sixty pounds as he hoped I would be able to do. Hmmm…how heavy is one hundred sixty pounds I wondered? So I tried to lift that much using both my arms. Holy Cow it’s really heavy! I think he must be kidding me. I thought to myself that if I can suspend one hundred sixty pounds from my private parts then I would definitely be a superman. Well there is one Chinese saying that goes like this, “Since you are here, you may as well stay and make the best of it.” I consoled myself with, “No pain, No gain.” Maybe by the end of this special self-inflicted torture I will have gained something valuable.
The first three days were just some intimate stretching and self-massage. Then on the fourth day I started the hanging exercise. I started with two and a half pounds (about five glass-bottles of beer). My goodness! I relaxed, happy that I wouldn’t have to try to suspend all 160 pounds at once and risk having my private parts tear out.
After the hanging exercise we were also required to hit our entire body with an iron broom. The broom has about 50 rods of stiff wire with blunted ends welded together then wrapped with cloth for the “handle” end and kept loose like a broom on the business end. Using an iron broom in this manner is one kind of “Iron shirt” Qi Gong practice. However it isn’t the same as the traditional Iron Shirt practice because Si-Sue practitioners don’t drink a special elixir of Chinese medicine. Iron Shirt Qi Gong is useful because it can help move your Qi through your whole body and make your Dantien stronger. In Si-Sue Jing, when you can suspend heavier weights then you will also get hit harder. At the end of training most people can strongly resist any heavy punching into their abdomen. 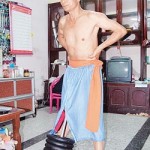 Through step-by-step practicing I was regularly able to suspend sixty pounds, but any attempt to increase the weight lacerated my skin too much. Even after taking a break of several days my skin would break again as soon as I tried to suspend a heavier weight. So, even after setting my teeth firmly into practicing for three months, I could only ultimately suspend eighty pounds. I decided to take a long break to heal my poor skin. Some of my fellow practitioners ended up breaking their ligaments when trying to suspend one hundred pounds, so they were also forced to take a break for a while.
In Taiwan there are some people who think the practice of Si-Sue Jing can improve their sexual prowess. However they seem to forget that this practice comes from Buddhism or Taoism. Do they think a Buddhist monk or Taoist priest needs to improve his sexual abilities? Most of the people I know who practice Si-sue Jing have some kind health problem. Of course this affects their sexual competence. After practicing Si-Sue Jing and improving their health, their sexual proficiency naturally improved.

After many years and a few different kinds of Qi Gong training I have come to realize that the human body is the human body. Qi Gong exercises can indeed improve one’s health but it will never be the way Chinese martial arts fiction describe it. Nothing can give you that kind of fantastic supernatural powers and turn you into an unbelievable superman.

–Danny
Below is a link to a web page I have about Hard Qi Gong and from YouTube
http://www.damazen.com/pages/hardchikungshaolin.html
http://www.youtube.com/watch?v=wj5bjgejHXk&NR=1