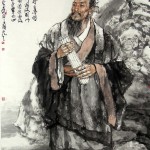 When a bowl of rice or a cup of soup lies between life and death, and you offer it in a nasty way, even a bum off the street will not accept it. If you kick it at him with your feet, even a beggar will not take it.

Yet a man will accept a huge sum of money without any consideration of propriety. What can the money add to his person? I can beautify my house, gain the favors of wives and concubines, or gain the attention of greedy acquaintances. Yet before, I would not receive a bowl of rice to save my life, but now I will accept lots of money for the beautification of my home, for the favors of wives and concubines or to give to greedy acquaintances. Was it also not possible to decline this?
This is called “losing one’s original mind.”