Who Is Your Opponent?

From the smallest scope, like personal martial arts practice, to the widest possibilities, such as national military exercises, all types of training need to have an imaginary opponent. I have come to realize, after many years of martial arts training and life experiences, that most of the time the main opponent for anyone, individual, corporate or even global, is their very own self. For example, think about who defeated Mike Tyson and Tiger Woods? Who let the Apple company decline and who built it up from the ashes to become a great company again? Who made Greece, Spain or Italy’s national power decline?

In Buddhist lore there is a famous story about prophetic dreams that goes like this: 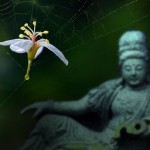 One day, Ananda told Buddha that he had had 7 dreams. Buddha asked, “What were the 7 dreams?”
“Buddha, in the first dream, I dreamt that the entire ocean was burning. The flames were so great that they rose all the way up to the sky!”
“Ananda, the noble ones do not interpret dreams, but your dream was indeed strange. The ocean of fire signifies that in the future, many Sangha/senior monks are evil and few are good. After receiving offerings they fight and argue. It is as if this clear and clean water transforms into a flame. What was your second dream?”
“Buddha, I dreamt that the sun was gone and the world fell into darkness, and that there were no stars in the sky.”
“Ananda, your dream prophesies that the Buddha is going to the final Nirvana soon, and that many of the great disciples will go as well. This signifies that the eyes of wisdom will soon fade. What was your third dream?”
“Buddha, I dreamt that monks no longer wore robes. They fell into pits and laymen stepped on their heads.”
“Ananda, this suggests that in the future, monks give public speeches but do not follow what they preach. They become jealous of each other, do not respect the law of cause and effect and, ultimately, fall. Laymen rise up and look down on the Sangha. They go into monasteries and frame monks, damaging the temples. What was your 4th dream?”
“Buddha, I dreamt of monks with incomplete robes, kneeling on thorns.”
“Ananda, this says that, in the future, monks do not wear holy robes, do not follow precepts, indulge in worldly pleasures, and have wives. This is a big misfortune for the Dharma. What was your 5th dream?”
“Buddha, I dreamt that in a thick forest, many pigs were digging up the roots of the Bodhi tree.”
“Ananda, this says that monks of the future only care about making a living. They sell Buddha statues and sutras as their occupation. What was your 6th dream?”
“Buddha, I dreamt of big elephants neglecting small elephants, and the death of the Lion, king of the beasts. Holy flowers were falling on the lion’s head, but the animals were scared and kept their distance. Soon the corpse was rife with worms which fed on the lion’s flesh.”
“Big elephants neglecting smaller elephants mean that in the future, the Sangha will become selfish and will not groom the young. The worms feeding on the lion’s flesh signify that no other religions can damage Buddhism. Rather, it is our own followers who will destroy my teachings. What is your 7th dream?”
“I dreamt that my head was supporting Mount Meru but I did not feel the weight.”
Buddha was relieved and said, “Ananda, this means that I will attain Nirvana in 3 months’ time. All people, including the great monks, will need your help to compile the sutras.

From this story we can see that Buddhism’s greatest enemy doesn’t come from without. It arises from within. 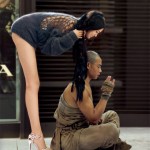 So, who is the main opponent we need to conquer in our lives? It becomes very clear. 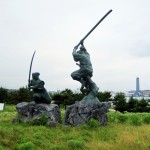