Pai Sha (strike therapy) is an ancient Chinese method for maintaining one’s health. The term “Sha” refers to congested blood, or debris formed by bruising or clots in the blood vessels, which impede transportation of nutrients via the blood and cause poor blood circulation. In turn, this results in disease within the human body, such as overall achiness, numbness, various kinds of vascular disease, etc. 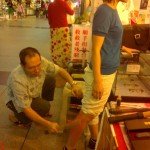 According to legend, tradition, and Yi Jin Jing, this therapy originated from the Northern Wei Dynasty over 1,400 years ago. It is generally believed that this type of therapy was developed by Hua Tuo in the Eastern Han Dynasty, but some people hold that this therapy was developed by Patriarch Bodhidharma during the Northern Wei Dynasty. Another technique developed by Bodhidharma, called Si-Sue Jing Qi Gong, calls for striking one’s entire body with an iron broom after completing the hanging exercises. 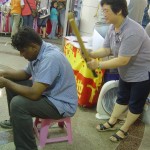 Pai Sha is a method of rhythmically striking the body with a special instrument. The object used is often a long bundle of thin pieces of bamboo i.e. a narrow broom with thin pieces of bamboo instead of straw and no long stick (nothing to sit on if you want to fly on a broomstick). Alternatively, the broom could have about 50 rods of stiff wire with blunted ends welded together then wrapped with cloth for the “handle” end, but kept loose on the business end).
The striker hits the body with strength but the blow is rapidly diffused by the natural give of the flexible bamboo rods. For smaller parts of the body, the pai sha tool can be a simple stick or other blunt device with a handle.
Pai Sha is similar to Gua Sha and cupping in that it promotes bruising in a measured way. Pai Sha can be a bit uncomfortable, and it is similar to Gua Sha in the sense that it is a folk practice rather than a formal medical practice. In other words, Gua Sha and Pai Sha are never really prescribed by doctors or seen performed in hospitals, but they are very common methods of self-healing among the general population. The basic theory is that raising bruises in a consistent and modest way encourages blood circulation and clears up old static blood.
Precautions:
1. Strike therapy on pregnant women, those with internal bleeding, bone fractures, unhealed surgical incisions, or wounds is strictly prohibited. One should refrain from strike therapy from the hours of 11:00 to 13:00, or within one hour after meals.
2. Do not strike at an angle perpendicular to the bone. Striking should be performed in a direction that is parallel or diagonal to the bone.
3. If purple/black bruising is found, strike therapy should not resume until the bruising fades.

After strike therapy, drink a minimum of 500ml of warm water to facilitate toxin excretion and dispersion of congested blood.

Once the congested blood appears after strike therapy, it is normal for the skin in the treated region to feel swollen and painful when touched, with no discomfort at other times. As there will be no skin lesions or wounds, no bacterial infections should occur. 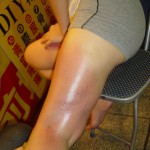 There is an old Chinese Saying goes like this: “Health is Equal to Wealth.” I believe that the value of good health exceeds that of wealth, because sometimes money can’t buy health. Strike therapy has become very popular in Taiwan and China because it’s easy and you can just do it by yourself. So why not give it a try? 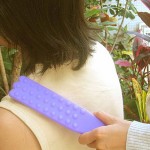 The traditional bamboo striker and modern plastic paddle are both available at a great low price at the Dharmazen online store:
http://www.damazen.com/cargo/index.html