One-Third Of Adults May Have Diabetes in U.S. By 2050 CDC Says

The Centers for Disease Control and Prevention (CDC) said on Friday that up to a third of U.S. adults could have diabetes by 2050 if Americans continue to gain weight and avoid exercise. 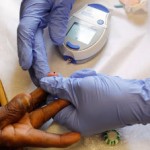 The CDC said the numbers are certain to go up as the population gets older, but they will accelerate even more unless Americans change their behavior.

“We project that, over the next 40 years, the prevalence of total diabetes (diagnosed and undiagnosed) in the United States will increase from its current level of about one in 10 adults to between one in five and one in three adults in 2050,” the CDC’s James Boyle and colleagues wrote in their report.

“These are alarming numbers that show how critical it is to change the course of type-2 diabetes,” CDC diabetes expert Ann Albright said in a statement.

“Successful programs to improve lifestyle choices on healthy eating and physical activity must be made more widely available because the stakes are too high and the personal toll too devastating to fail.”

According to the CDC, about 24 million U.S. adults have diabetes now, most with type-2 diabetes linked with poor diet and lack of exercise.

They said that no matter what, diabetes will become more common.

“These projected increases are largely attributable to the aging of the U.S. population, increasing numbers of members of higher-risk minority groups in the population, and people with diabetes living longer,” they wrote.

Diabetes was the seventh-leading cause of death in the U.S. in 2007, and it is the leading cause of new cases in blindness among adults under age 75, as well as kidney failure, and leg and foot amputations not caused by injury.

“Diabetes, costing the United States more than $174 billion per year in 2007, is expected to take an increasingly large financial toll in subsequent years,” Boyle’s team wrote.

David Kendall, chief scientific and medical officer of the American Diabetes Association, said that previous research has suggested that the financial burden may easily double in the next 20 years

“There’s a dual message here: prevention where it’s feasible, and critical and early intervention for those already diagnosed,” he says.
“http://www.redorbit.com/news/health/1936423/cdc_onethird_of_adults_may_have_diabetes_by_2050/index.html“