You Should Know The 8 Taboos Of Drinking Chinese Tea

The many benefits of drinking Chinese tea are well known, but one thing to understand is that not everyone can drink tea whenever they want. There is one Chinese saying that goes like this: “Water can float a boat, as well as capsize it.” The same applies for drinking tea. If you sip an ill-timed cup of tea, at an unreasonable hour, not only is it useless to the body and mind, but it may possibly injure you. So everyone should know the taboos for drinking tea. 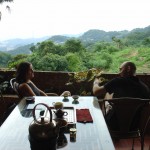 1 Don’t drink tea when you have the empty stomach.
When you drink tea with an empty stomach it will sometimes cause the body discomfort. This is because the stomach’s gastric juices will be diluted by the tea. The speed and efficiency of your digestion decreases, but absorption increases i.e. a higher than usual proportion of partially digested food crosses into your bloodstream. This causes many bad ingredients in the tea (usually decreased by digestion) to enter unmodified into your bloodstream, causing headaches, dizziness and other symptoms.

2. Don’t drink tea immediately after a meal.
Many people like to drink tea immediately after meals, thinking that it has the ability to clear the intestines of grease. In reality, it probably has the opposite effect. The tea dilutes gastric juices, affecting food digestion and absorption. The tannins in tea will make the protein in the food not easy to digest. Protein and tannic acid combine to create many large molecules, causing the waves of motion in the entire digestive system to slow down. Waste stays in the intestine longer, easily giving rise to constipation. Retained waste allows the manufacture of many toxic and carcinogenic substances, as well as causing other problems.
It is suggested to wait at least one hour after a meal before drinking tea.

3. Do not drink tea when intoxicated.
Many people try to sober up by drinking tea or coffee. This is not the right way! The caffeine will make you feel more alert, but doesn’t speed up your reflexes or improve your decision making skills. Instead of feeling too tired and drunk to do something, you may think are competent enough to engage in a potentially harmful situation.
Though alcohol slows down your nervous system and relaxes your muscles, it speeds up your heart rate. Tea will speed it up even more. The strain on your heart may be significant enough to give you a heart attack, especially if you have an underlying heart problem.
Caffeine alone doesn’t cause dehydration, especially for people whose body is used to having tea every day. But alcohol is a diuretic, causing the kidneys to produce more urine, depleting the body of water. Combining caffeine with alcohol depletes the body of essential electrolytes such as sodium, potassium and calcium. Electrolytes are important for maintaining hydration, nerve and heart function. This diuretic effect of caffeine and alcohol also promotes hangovers, fatigue and lethargy due to dehydration.

Ideally, one should have their last drink about 90 minutes before the night is over. That means there is no “quick fix” for sobriety as it takes about one hour to oxidize one ounce. Alcohol makes its way through the body, through the liver and then is excreted through urine and sweat.

4. Women should not drink tea during menstruation. 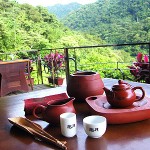 Tea contains large amounts of caffeine. After you drink it, your body’s nervous and cardiovascular system will be stimulated, resulting in dysmenorrhea, excessive bleeding and menstruation problems. If you can, try to avoid smoking, drinking, chewing betel nut, or eating spicy food, during your period, as this increases the body’s burden.

5 Do not drink tea when you have the flu or a fever.
During a fever your body temperature will rise. The tannin in tea can interfere with the body’s heat regulating function, causing your body temperature to rise further while decreasing your ability to sweat, the primary way your body rids itself of extra heat. It will take you longer to recover from the flu.

6 It is forbidden to take medicine with tea 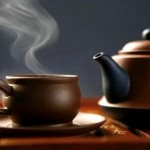 The synergy between medication and tea is not good. It will make an illness more difficult to rehabilitation. This is because the tannins and theophylline in the tea will react with the medication causing it to lose its original properties. This decreases its treatment function. Therefore, it’s suggested to not drink tea until at least two hours after taking medication or until after the effects of the medicine have passed.
But there are exceptions. You can drink tea and take vitamins. Tea polyphenols can actually promote the absorption of vitamins.
Tea itself has many medicinal effects, mostly positive, but some negative as well e.g. it increases blood flow in the kidneys, lowers blood pressure, has antibacterial properties, but also promotes the formation of kidney stones. Please go to http://en.wikipedia.org/wiki/List_of_health_effects_of_tea#Tannin for a longer list.

7 Do not drink green tea and other strong tea at night time
Green tea is only slightly oxidized/fermented, so the polyphenols content is high. Its natural energizing effect is also high. There are large amounts of caffeine in strong tea, stimulating the nervous and cardiovascular system. This is not good when you are trying to slow down and relax the body before going to bed. Black tea is fermented tea. Its polyphenols composition is low, so it has a smaller energizing effect. Its ability to warm the stomach actually may help bring sleep. So if you really want to drink tea before bed, it’s suggested to drink just a small cup with not too much volume.

8 Do not drink the first soak of tea.
Tea processing plant will use a lot of chemicals in the production of loose leaf green tea. The goal of the first soak is to wash away these toxic substances, while simultaneously refreshing the leaves. Pour hot water over the leaves in your tea pot, tilt the pot a couple of times to make sure all the leaves have been bathed and then pour the water away. Sometimes this first soak is used to warm up the tea cups, but remember to not drink it!

Now that you know the taboos of drinking tea, I hope you will enjoy your next cup of Chinese tea more! 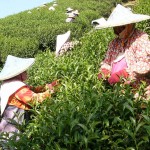 Dharmazen online store has high quality organic tea, available at a reasonable price. Feel free to compare our prices to those offered by other online stores. http://www.damazen.com/cargo/index.html