In recent years Chinese tea has becoming popular in western countries. Which kind of tea do you drink? How much do you know about it? Oxidized or not oxidized? Do you even know?

Most Chinese tea is classified according to color; green, white, yellow, blue, black and red. Blue But it can also be categorized according to its degree of oxidation; non-oxidized, partially oxidized, or fully oxidized. In the world of tea, the term oxidation or “fermentation” refers to the actions of natural enzymes, present in the leaves, on the juices and tissues of the leaf; this is not “fermentation” in the true sense of the term (as, for example, the action of yeast in producing beer). Green tea is usually less than 5% oxidized while black tea is often 85% or more.

Different degrees of oxidization give the tea different characteristics. Many people have heard of Oolong, but don’t “green tea” encompasses many varieties of green tea. 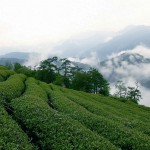 BaoZhong or Pouchong oolong, also called light oolong, is a lightly (18% oxidized) tea. It has a twist shape, with floral notes, and is usually not roasted. It’s taste is somewhere between green tea and what is usually considered Oolong tea (Wulong, ‘Black Dragon’), though often classified with the latter due to its lack of the sharper green tea flavours. It features an elegant orchid fragrant ‘Pouchong’ refers to its paper wrapping.

Taiwanese High Mountain Tea is grown in altitudes of 1,000 meters or above. Ali Mountain, or other high mountains is the most widely known general name for lightly oxidized (20%) oolong tea, much of it picked in winter and therefore termed “Winter tea”. Among the oolongs grown on Ali Mountain, tea merchants tend to stress the special qualities of Gold Lily tea var. (Chin-Hsuan, or Jin Xuan) tea, which is really the name of a cultivar developed in Taiwan in the 1980s. The oolong tea made with it has a particularly deep flavor. Taiwanese love to drink this tea.

TieGuanYin or Iron Goddess of Mercy green tea is a traditional oolong. It is roasted, with a ripe fruity aroma and has a stronger taste. The tea liquid is reddish-brown with a roasted nutty character. It’s partially oxidized (40%).

Pekoe Oolong, commonly known as “Oriental Beauty Tea”, is a lower elevation oolong with a pronounced, honey-sweet stonefruit taste. Some say this taste is the result of the tea plant’s reaction to a small insect that munches on the leaves. Its unique flavor originates in part from the inclusion of insect eggs and egg sacs during harvesting, contributing an element that has been described as “earthier and more robust” than Earl Grey tea. The acceptance of this flavor has led to tolerance of the insects and organic growing practices for this tea. 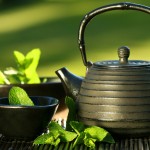 LongJing or Dragon Well tea leaves are oxidized less than 5%. They are only picked once a year during mid-March to mid-April when the leaves are at their peak. Due to the stringent selection process for high quality leaves, this tea is not widely available.
It produces a tea that is very gentle and sweet. The tea leaves can be eaten after infusion.

BiLuoChun or Green Snail Spring tea is so called because it is rolled into a tight spiral, resembling snail meat, and is cropped early spring. It has a strong aroma and is regarded very highly among tea connoiseurs.

PuErh from mainland China
PuErh Tea is usually double oxidized, producing an 80% oxidized tea. It can be made using two methods. Raw or “sheng types are those in the process of gradual darkening through exposure to the environmental elements. Fermented or “shou” tea leaves undergo a microbial fermentation process after they are dried and rolled.
In 1972 a relatively standardized process for producing PuErh was developed by Menghai Tea Factory and Kunming Tea Factory in Yunnan province. It’s called “wet piling” in English, which involves piling, dampening, and turning the tea leaves in a manner composting.
PuErh tea is renowned for its medicinal qualities. Unlike other teas, Pu-erh’s quality and taste improves with age. Its taste is often described as earthy but some very well aged Pu-erh produce cups of incredibly smooth and wonderfully complex beverage.

Black tea
Black Jade Taiwan tea at about 95% is a fully oxidized tea. It is said to have notes of cinnamon and mint. 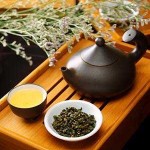 Producing raw tea, partially oxidized, or fully cooked tea all depends on a third major process: “kill-green” or fixation. Tea leaves are ‘fired’ (heated in pans) or steamed before they completely dry out
A very important natural process called the “Maillard reaction” (a chemical reaction between an amino acid and a reducing sugar) was started during the oxidation process. Fixation can intensify the process for a short time before determining where the reactions stop. This is the basic cornerstone in the formation of a tea’s unique collection of taste and aroma compounds, which give a tea its liquor colour, strength, and briskness.
Another purpose of baking is to reduce the moisture content of tea leaves, lending it a natural sweet taste. Only partially oxidized tea such as Oolong, Iron Goddess of Mercy and Oriental Beauty tea use this process. This step is omitted when seeking the natural flavor of green tea or black tea.

Raw tea is both partially oxidized and lightly baked to kill-green. Theophylline and caffeine levels are greater in raw tea. According to Traditional Chinese Medicine (TCM) raw tea is a cooling substance. Medium roasting changes tea into a warming and soothing substance, as found in Iron Goddess of Mercy tea.

Tea drinker in Taiwan or China make a point of buying loose leaf tea leaves of a least mid-grade quality. Low quality tea, like all green tea packaged in tea bags, and some very cheap loose tea has an unpleasant taste. It may be that you have tried green tea before and not enjoyed it because the quality was poor. Steeping time is important too.

I hope you enjoy your next cup of Chinese tea!

Dharmazen online store has high quality organic tea, available at a reasonable price. Feel free to compare our prices to those offered by other online stores.http://www.damazen.com/cargo/index.html