1. A master ask his disciples a question, “While boiling a pot of  water, you perceive halfway through that there isn’t enough firewood. What are you going to do?” 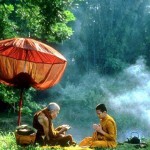 One disciples said, “Hurry outside to go look for more wood, Master.” Another said, “Go next door to borrow some firewood.” A third replied, “Hurry out to buy firewood.”

To  all these suggestions the Master responded “Why don’t you pour some water out of the pot?”

What is unforeseen always happens. What you want to gain comes from what you have to give away.

2. A rich man went to see a wise man for a remedy for his unhappiness. He owned everything he had ever wanted but he still was not happy and felt worried all the time. He was especially worried about losing it all one day.  After listening to the rich man’s complaints, the wise man asked him, “Can you carry one million dollars in bills?”.

“How about 10 million dollars in bills? Can you carry that?” asked the wise man again.

“No way! It’s too heavy for me. It will hurt my back.” The rich man exclaimed.

“You know you can’t carry 10 million dollars because it is going to hurt your back. So why do you still carry them in your mind?”

3. If you accidentally lost $100 dollars somewhere, and you had to spend $200 to get it back, would you do it? This seems like a silly question, but you can see it happening all the time. Like when you have been scolded by someone then spent countless hours feeling miserable. Or when someone gets so angry they seek revenge at any cost. How many stories have we heard about people pining for a love irretrievably lost?

4. When a drop of ink falls into a glass of water, the glass of water immediately discolors and can not be drunk. But when you pour a bottle of ink into the ocean, the ocean is still blue. Why? Because the level of tolerance between the two is not the same.

An unripe ear of wheat stands straight up, whereas a ripe ear droops. Why? Because their weight is not the same. 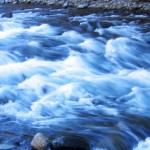 Lenience to others is tolerance; humbleness is weight; when both are found together then you have a person of character.

5. One day, a dog met a wolf for the very first time. The dog asked the wolf, “Do you have a house to stay in?”

The dog asked him again, “Do you have three meals and snacks everyday?”

“Then does anybody play with you or buy things for you? the dog asked one last time.

Once again the wolf answered, “No.”

Feeling rather superior, the dog spoke once again. “You’re incompetent. You have nothing!” The Wolf laughed loudly and said, “I have personality. I don’t eat other people’s excrement. I have goals to chase. I have a kind of freedom you don’t have or even understand. I’m a solitary wolf. You are just a dog who thinks his life is happy!” Then he walked away.