Hell And Heaven Are In Human’s Hearts

Here is a recent news article: “Wars stripped about $284 billion from Africa’s economies”
JOHANNESBURG (Reuters) – Wars stripped about $284 billion from Africa’s economies between 1990 and 2005, roughly equal to the amount of aid money given to the world’s poorest continent, according to a report on Thursday by Oxfam International. In the study “Africa’s Missing Billions,” the British aid group said the 23 conflicts engulfing Africa in the period had shrunk economies by an average 15 percent per year at a cost of almost US$18 billion a year. Oxfam based its estimate on a calculation of the various costs of conflicts and violence, including higher military expenditures, loss of development aid, rising inflation and medical expenses of those injured or disabled. It said, however, that the tally was probably on the low side, when considering the impact of civil wars on the economies of neighboring countries as well as the long-term effects of higher military spending on individual economies. The costs are shocking,” Irungu Houghton, Oxfam’s African policy adviser, said in a press release. “This money could solve the HIV/AIDS crisis, prevent TB and malaria, or provide clean water, sanitation and education.”…
It’s a sad news article to read especially when mankind claims to be “the wisest of all creatures”. We have destroyed many creatures and we often don’t treat congeners (i.e. primates) well either.

Here is a story from Sakyamuni Buddha. He once tried to head off an impending war between the ancient countries of Magadha and Kapilavattu, home to his own Shakya clan. He used logic and persuasion and, as a last resort, he sat zazen under a dead tree by the side of the battlefield. Since it was very hot, (the king of Magadha) couldn’t understand why the Buddha was sitting under a dead tree; usually people sit under beautiful green trees. So the king asked, “Why do you sit under the dead tree?” The Buddha calmly said to the king, “I feel cool, even under this dead tree, because it is growing near my native country.” This really pierced the king’s heart and he was so greatly impressed by the message of the Buddha’s action that he could go no further. Instead of attacking, he returned to his country. Sakyamuni Buddha tried to stop the king three more times, but the king’s attendant still continued to encourage him to attack and finally he did so. The fourth time Sakyamuni Buddha didn’t show up at the battlefield because he knew that that his country and people had a common Karma and he couldn’t change it. He watched his country and his people being destroyed. Sometimes I think Sakyamuni Buddha could have lead his country’s people to fight against Magadha’s king. He could have saved a lot of people’s lives if he won. Instead he continued to publicize and exalt his philosophy. For the next two thousand five hundred years his life’s work continued (and continues to this day) to change many people’s lives. His way will continue to affect many people’s future lives. So which one is more important? Just as with the Dalai Lama’s experience, knowing about war cannot solve the problems.

Hell and Heaven are opposites, just like hate and love, foolish and wise, selfish and selfless, vice and virtue… and all exist in our heart. In Zen Buddhism we talk about Heart/Mind is Buddha, so in one moment and with one thought you can be a Buddha like those in Heaven. Similarly one thought can also make you a Devil like those in Hell. 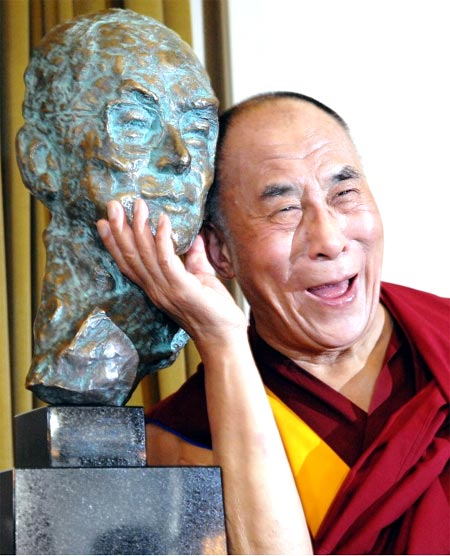