Su Shi (1037 – 1101), better known as Su Dongpo, was one of the Song dynasty’s most influential poets and essayists. Su Dongpo was an avid student of Buddhist teachings, and often discussed them with his good friend, the Zen master Foyin. The two lived across the river from one another – Su Dongpo’s residence on the north side and Foyin’s Gold Mountain Temple on the south side. One day he went to meditate with Zen Master Foyin at Golden Mountain Temple. After Su Dongpo had experienced a total relaxation of body and mind, he asked Zen Master Foyin, “Zen Master, what do you think of my sitting posture?” “Very magnificent. Like a Buddha!” 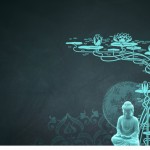 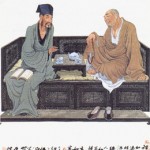 This news soon reached Su’s sister Su Xiaomei. She asked him, “Brother, how was it that you beat Zen Master today?” Su repeated the whole story vividly to his sister. Su Xiaomei, talented and smart as she was, told Su Dongpo straight to his face, “Brother, you actually lost. It is because Zen Master’s mind is actually that of a Buddha that he could see you as a Buddha. As your mind is like a pile of bullshit, you, of course, saw him as a pile of bullshit.”
Su Dongpo, realizing his Zen practice was far inferior to Zen Master Foyin’s, was speechless.
Afterward Su Dongpo practiced meditation and got better. One day after meditating, Su Dongpo felt inspired and wrote the following poem:
I bow my head to the heaven within heaven
Hairline rays illuminating the universe
The eight winds cannot move me
Sitting still upon the purple golden lotus 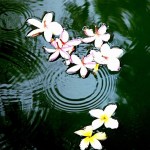 Impressed by himself, Su Dongpo dispatched a servant to hand-carry this poem to Foyin. He felt certain that his friend would be just as impressed. When Foyin read the poem, he immediately saw that it was both a tribute to the Buddha and a declaration of spiritual refinement. The “eight winds” in the poem referred to praise, ridicule, honor, disgrace, gain, loss, pleasure and misery – interpersonal forces of the material world that drove and influenced the hearts of men. Su Dongpo was saying that he had attained a higher level of spirituality, where these forces no longer affected him.
Smiling, the Zen master wrote “fart” on the manuscript and had it returned to Su Dongpo. Su Dongpo had been expecting compliments and a seal of approval, so he was shocked when he saw what the Zen master had written. He hit the roof: “How dare he insult me like this? Why that lousy old monk! He’s got a lot of explaining to do!”
Full of indignation, Su Dongpo ordered a boat to ferry him to the other shore as quickly as possible. Once there, he jumped off and charged into the temple. He wanted to find Foyin and demand an apology. He found Foyin’s door closed. On the door was a piece of paper, with the following two lines:
The eight winds cannot move me
One fart blows me across the river 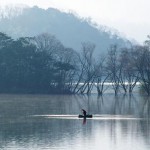 This stopped Su Dongpo cold. Foyin had anticipated this hotheaded visit. Su Dongpo’s anger suddenly drained away as he understood his friend’s meaning. If he really was a man of spiritual refinement, completely unaffected by the eight winds, then how could he be so easily provoked?
With a few strokes of the pen and minimal effort, Foyin showed that Su Dongpo was in fact not as spiritually advanced as he claimed to be. Ashamed but wiser, Su Dongpo departed quietly. This event proved to be a turning point in Su Dongpo’s spiritual development. From that point on, he became a man of humility, and not merely someone who boasted of possessing the virtue.

In Buddhist practice, a teacher will usually remind students to be careful of feelings and conceit. This is because, after practicing for a while, many people will start to believe they people of great virtue and become conceited. When they see other people making mistakes they can’t tolerate it: just like Su Dongpo. He liked Foyin praising him, saying he looked like Buddha while he could only see others as looking like bullshit. This also happens with martial artists when they start to criticize other people’s skills. What is true practice and cultivation? Not in meditation, not when you feel peace. It is in living present in every moment. I have to remind myself of this sometimes.