An Amazing Senior In Taiwan

A few days ago I read an amazing article in a Taiwanese newspaper. It is about a 101 year old man and his health regime.

Mr. Tray, a man who says he is one hundred and one years old, still has a mouthful of his original teeth. He shows them off proudly in the article. He is not nearsighted either, a common affliction for the elderly.
He goes on to describe his health regime. He goes to bed at nine o’clock every night and get up at four-thirty every morning. He begins his day by doing exercises while still in bed. He learned them seventy-seven years ago from a monk in China. After retiring at sixty-six, he began doing those exercises daily and has continued for thirty-five years. His bed exercise include: Breathing (one thousand times into his Dan-Tien), stretching and rubbing his face and head. He also walks at least half an hour every day. He says; “ My body is even better than before I retired.”Besides the body exercise, he also discusses the consequence of having a sanguine disposition/ taking a brighter view of life. He thinks that if you want to have real happiness in life, then you need have less of desire and cultivate a leisurely attitude.
His secrets for the health and long life were simple; “Just have enough nutrition, enough sleep, enough exercise and try to keep a pleasant mood.”
The News article link: “http://mag.udn.com/mag/life/storypage.jsp?f_ART_ID=238317” “http://mag.udn.com/mag/life/storypage.jsp?f_ART_ID=238316 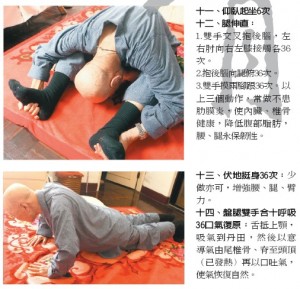 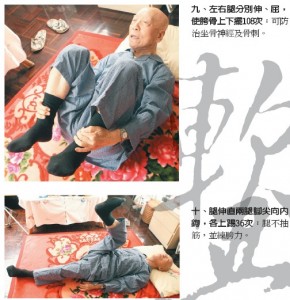